This summer, Dr. Bill Clifford retires from his role as HDC Medical Director. Dr. Clifford is a founder of HDC and has been a champion of data-driven practice since the introduction of Electronic Medical Records (EMR) in BC. Bill has been a leader in harnessing the power of IT to ensure patients receive coordinated, quality care. He was instrumental in creation of HDC in 2016, through the merger of AMCARE and the Physician’s Data Collaborative (PDC), to support a network of physicians for the collaborative use of clinical data. His dedication, vision, and immense contribution have led the organisation to where it is today. 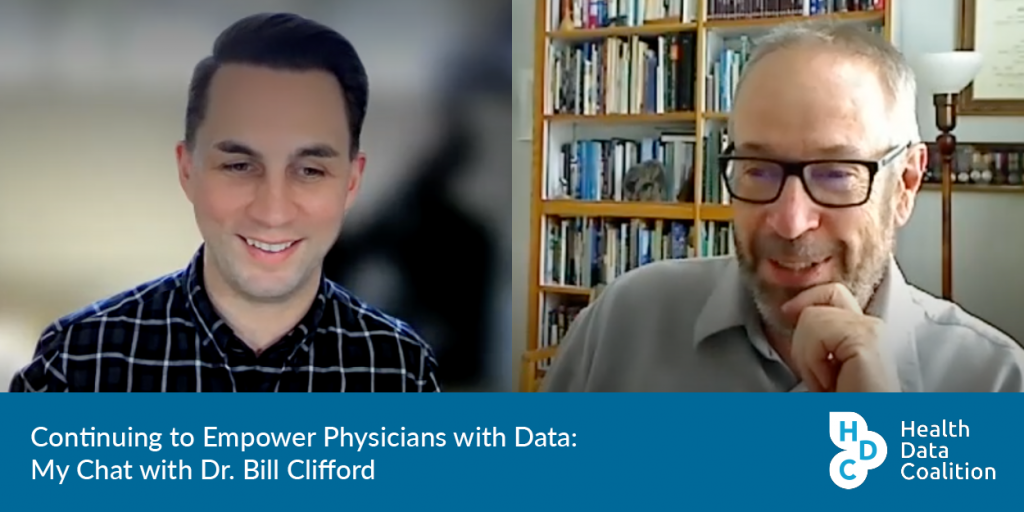 Why don’t we start at the beginning. How did it all start?

Dr. Clifford: There was no hard start date for AMCARE but I believe that organisation began around 2008. AMCARE – which stands for Aggregated Metrics for Clinical Analysis, Research and Evaluation – was the initial organisation which then led into the Physician Data Collaborative, or PDC, which then led to the Health Data Coalition; it was a progressive and iterative journey.

I began thinking about an EMR to produce data beginning in my residency in 1986 and went on to build my own for quality improvement as well as practice management.  In Prince George during the early 2000’s, we wanted to figure out what was going on in our community with respect to disease management, wellness and attachment. That’s when I started thinking around how we would generate that data collectively. That led to me using my access to the EMR, with permission, to generate aggregate data, and then share at the community level. By request, people who wanted their own individual data could receive it as well.

This went on until 2004 or 2005 when we began to use the “scorecard” in the Medical Office Information System (MOIS) to generate aggregates.  At the time, MOIS was the most popular EMR in the North so the ability to generate aggregates wasn’t confined to Prince George. I was covering approximately 35,000 or 40,000 patients by the time I stopped manually aggregating community data. It was becoming a full-time job, so it was clear  that this manual approach was not sustainable. Coincidentally, around that time, funding was offered to the University of Northern British Columbia to build a registry for cancer. When I was asked for advice because of my IT background. I pointed out that this would be incredibly complicated, and fraught with all kinds of issues about databanks and duplication of efforts across the province. As a result, the funding that was earmarked for the cancer project was assigned  to look at cancer data as part of all primary care data.   AMCARE was born of this. It was developed on open standards and never conceived to be EMR specific but MOIS was the first contributor. We were able to  get AMCARE live within two years and extend the funding out for a full 10 years. Our goal was to make it available provincially. Meanwhile, Dr. Tracy Monk had been having similar ideas. So, when we got together, we formed the Physician Data Collaborative.

Over the next five years, it became clear that we should start fresh with a different kind of paradigm and that was eventually the Health Data Coalition. That was April 2016.

The idea with the Health Data Coalition was that we would be mindful not only of quality improvement, but also system design and research. That would be our long-term goal. We would begin by engaging physicians with quality improvement through data and see where we go.

Your approach was really grassroots. Were ideas for AMCARE, PDC and eventually the HDC well received initially?

Dr. Clifford: No. It was a classic example of when you’re a bit too far out in front and you can be viewed as a distraction or even an enemy.

A lot of doctors outside of the north began wondering who we were and if we were getting money out of this. It wasn’t a for-profit business idea though – we were making a pitch for a function which we could all build collaboratively. Initially, people were sceptical.

Is the distribution of data contribution balanced across the province these days? It seems it’s no longer all data in the north, we have a good spread.

Dr. Clifford: When you look at sheer numbers, obviously the Lower Mainland and areas outside the north, are the majority. That means that the technology isn’t unique to the north, and it can be done at scale. But the penetration of 70% of patients in the north indicates the north continues to have a larger proportion of engaged physicians.  That is likely just because there has been more time in the journey.

When you strip away that technology, it is about engagement. It’s about paving the way so there’s a belief that this is meaningful. That’s what I find the most gratifying, looking at those graphs. I hope to see numbers be an even and proportional representation across the province. I’d love to see that number at 80% to 90% penetration of primary care actively engaged either as a meaningful contributor or someone with their sleeves rolled up doing QI, based upon the numbers.

We know that HDC data is utilised in different ways. Can you share an example of a project you supported where you’re proud of the fact that HDC was helpful?

Dr. Clifford: Individual projects, by design and intentionality, take a bit of a backseat to what comes up through serendipity.

An example is an ultrasound project, screening for aortic aneurysm. A group of resident physicians in Prince George were doing their mandatory practice improvement project on aortic aneurysm screening using AMCARE data. They presented it to medical staff and about six months later, the whole community had begun incorporating aortic aneurysm screening into wellness activity and rates went up significantly across Prince George. Two years later another resident by accident did the same project and the graph by that time had plateaued but then it shot up again after that presentation. This unintended experience showed the value in the shared understanding of data and the empowerment of a community to do something about it.

Another example is when hepatitis C curative treatment was made available to the public without cost. Physicians responded in droves, and you can see it in the HDC Data. Hepatitis  C viral load testing suddenly jumped with no intentional coordination. Some physicians actively followed their patients, marking Hepatitis C as resolved when treatment was confirmed successful. As a result, HDC shows some areas with reduction of Hepatitis C prevalence to a third of the previous level which had been around the national average in Canada. Can you imagine if this happened across Canada with no investment outside of what you’re already doing anyways?! That’s phenomenal.

You’re a visionary by thinking about the value of data so long ago, and then of course, the system never moves near the speed we want it to. How do you deal with that tension?

Dr. Clifford: I just have ridiculous optimism! I really want to see the country’s primary care data used in a meaningful and effective way through that virtuous cycle, where the point of care benefits as much as the community benefits as much as the regions and the province benefits. And in turn, that knowledge benefits patients. That’s really what has kept me going in this. I’ve been fully committed to that notion of what primary care can do and should be doing. The gap is widening at an accelerated pace, partly from pandemic and many other systemic factors.

If there was ever a time that we needed to have this data to move forward, it’s now, before primary care vaporises and completely collapses in this country.

I think the biggest challenge for HDC is to get people to understand the quality improvement opportunities data offers. It’s incredible seeing HDC spreading for the right reasons, because we’ve been so assiduous about physician governance and not making it driven by something purely financial. We’re doing it from a professionalism point of view and it’s working.  It can even be a partial antidote to burnout.

You talk about the power of data. You’ve said data devoid of context and devoid of the connection to the frontline providers is not nearly as useful and sometimes harmful. Can you explain?

Dr. Clifford: Years ago, I did a roadshow presentation titled, Big Data from Small Places. The idea being that if you don’t get the context and are not collecting it with contextual knowledge then it’s not nearly as beneficial and can be dangerous.

You can leverage or magnify errors with bad data. We know that when people start working with their own data, in their own practice or in their own community then they get motivated to have better data.

Do you have any advice for me as I move into the role of Medical Director at HDC?

Dr. Clifford: This is really complex. I’ve got the advantage of 40 years in data, data models, information models, programming and those kinds of things. It would be unrealistic to expect that you’re going to gain that knowledge in the near term and start actively using it. What is important in your medical director role for the HDC is that there’s oversight from a political lens, but also from synthesising the QI and clinical context.

It’s important that people come together, be curious and ask questions. We know that a non-clinician analyst sitting in a meeting hearing the story about a need at the clinical coal face will interpret information in different ways than a clinician.  Of course, the reverse is true as well.  Physicians could come back and ask the medical director the wrong questions. It’s better that both expertises are in that same meeting, in order to debrief, and arrive at better answers to questions coming from providers, developers and the broader health system.

I agree, an open mind and holistic view is so essential. Thank you so much for your time and for sharing your wisdom and knowledge. I’ve no doubt I’ll be calling on you with questions for years to come. You’ve been such an incredible asset to HDC and the whole medical community. I’m honoured to be assuming your role.